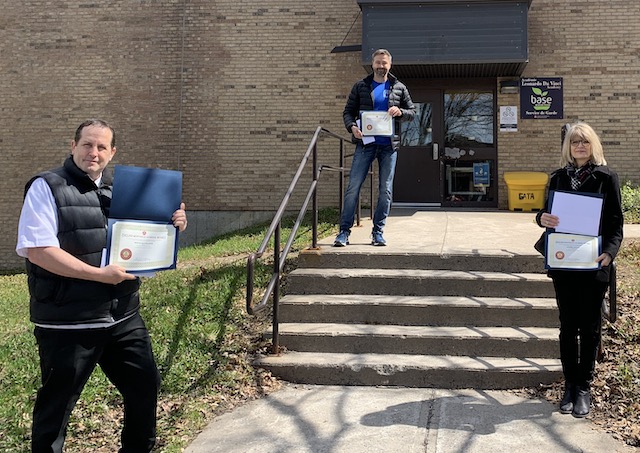 On the occasion of English Montreal School Board Teacher Recognition Day on May 8, three teachers will be presented with special awards from P.F. Chang’s and La Cage Brasserie Sportive, as well as certificates and gift cards to Chapters/Indigo. The winners will  be profiled on promotion co-sponsor CityNews Montreal.

The EMSB launched this ceremony six years ago to coincide with National Teachers Day in the United States.

Mr. Gaudette teaches physical education to students from kindergarten to Grade 6 in French at LDVA. After graduating from university, Mr. Gaudette’s first job was in the field of fitness and recreation at Olympic Stadium. When he and his wife adopted their second daughter he no longer wanted to work evenings and weekends. “So, I decided to come back to my first love, and the reason that I did my degree in Physical Education, which was to teach children,” he said.

In 2006, Mr. Gaudette joined LDVA as a substitute and he loved it right from the start, notably the environment and the constant challenge to try to find new ways to get students to enjoy moving and being healthy. “I truly appreciate always having the support from the administration and the collaboration of great colleagues to help organize activities, challenges, and other ways to keep our students moving and eager to come to school every day,” he said. “I am very motivated by the idea of helping each student reach their full physical potential and help them build a strong foundation of skills and abilities. However, most importantly, is my belief that we are contributing to help our students become better humans who care about others and are invested and committed, passionate and generous.

“I love what I do! I am always happy in the morning to come to school and see my colleagues and students. I am always proud to see the student’s graduate, to go to high school as healthier, stronger, confident young men and women. It is a little sad that they are leaving us, but at least we know we have prepared them for a bright future!”

In addition to adapting his teaching style and activities towards children aged five to 12, he is continuously looking for new ways to motivate the children to lead healthy and active lifestyles.  For example, he spearheaded a special club for girls in Grade 6 after seeing that they were becoming less active and more concerned with physical image, rather than being physically healthy and active.

Mr. Gaudette is the leader in helping LDVA be a Force 4 Physically Active School and, together with the administration, has organized for Pierre Lavoie’s team to come and film an episode of their physical activity capsules at the school, as well as bringing their tour bus to RDP with workout equipment inside for students to experiment. Mr. Gaudette is always ready to go above and beyond to offer extra-curricular activities at the school if it means his students will benefit. He was pivotal in kick starting the  Buddy Program, where each Grade 6 student is paired with a kindergarten buddy. Throughout the year, these buddies have many opportunities to learn, laugh and read together and exercise together. Grade 6 students receive a special bracelet to outline their commitment and importance of their roles as leaders.

Mr. Gaudette was a leader in helping LDVA become the first English school in the east end to have a partnership with the police department and have Grade 6 students trained as leaders in the “Unité Sans Violence Program.” The students are trained by the police officers and then become leaders in the school during recess and lunch time. Under the watchful eyes of the Grade 6 students, the younger ones are recognized with “Caught You Being Good” tickets for making positive and helpful choices.  At the end of the school year, the Grade 6 students are recognized for their participation in the program by receiving a certificate from the police department presented by the local community officer.

Leading training sessions with another teacher colleague, Mr. Gaudette has trained both student and staff teams to run the 5KM Scotia Bank Run, raising funds for the Montreal Neurological Institute. He has given up countless lunch hours to encourage the students to be active during indoor lunch challenges when the weather conditions did not permit students to go outside and play. During the three recess periods, he continuously organizes active materials for the students to use outside in collaboration with the LDVA Base Daycare Team as well.  He plays a pivotal role in organizing different activities in different zones in our school yard.  The activities are multiple and change throughout the various months and seasons.

“He is truly a team player and is the first to join to help the community in any way possible,” says Governing Board Chair Luigi Garofalo, who nominated him. “The COVID-19 pandemic has truly hit everyone. However, Mr. Gaudette has taken this as an opportunity to continue being a role model and mentor to his students. He is regularly posting activities on social media that both students and families can do to keep active. He has been a blood donor and even participated in a virtual Spartan race and encouraged students and parents to join. The world needs more teachers like Mr. Gaudette to continue inspiring our students and demonstrate that teaching is truly a vocation and passion!”

Adds Principal Nadia Sammarco: “Daniel brings an incredible tangible energy to the school every single day, from the moment he walks through the doors! He believes in every single human being! Whether he is planning for his physical  education class or organizing an extra-curricular activity, students and staff know how much he cares and are motivated to live up to what he believes in them.”

Cicalo currently teaches Grade 4 at Michelangelo. She has been in this profession for 25 years. It all began at the former Tara Hall Elementary School in Anjou, a place she still holds near and dear to her heart even though it closed its doors many years ago. “I went there as a young girl, and after moving back to Montreal from a 25 year stay in Calgary, I also sent my children there,” she says.

Once Tara Hall closed, Ms. Cicalo moved on to East Hill for three years and then Michelangelo. “Anyone in this career knows that teaching is truly a vocation and not a ‘job.’ Being with young children is an experience like no other,” she says. “There are challenges from time to time, however knowing the positive impact teaching can have on children, as well as the hugs we receive and the curiosity and growth we see in them, is what really keeps me going. There’s nothing else like it. I must say that teaching has been one of the most rewarding experiences I’ve had and am very glad I made that career choice many years ago.”

Parent Sognia Milone, who nominated her said:  “The first time I met Miss Sandra was at orientation night back in August 2019.  My first impressions were quite pleasing. I thought she was the sweetest person, very well-spoken and   so calm! I was astonished by her demeanor. I thought to myself, ‘How can she be an elementary school teacher ?’ Throughout the year, she consistently impressed me by challenging her students, rolling up her sleeves and always being there for the parents as well.”

During the COVID-19 pandemic, with students unable to go to school, Ms. Cicalo has risen to the challenge. She has gone above and beyond for her students, whom she calls regularly and has some quite interesting conversations. “Her emails literally don’t stop and that is a good thing,” said Ms. Milone. “She sends numerous worksheets for her students to complete, followed by YouTube videos to learn the new concepts. Talk about leveraging technology to continue driving her course material. What amazed me the most was her personal touch. She has asked her students to keep sending her pictures, drawings and essays. Additionally, she shares each student’s work with the rest of their classmates. You can sense she genuinely loves and misses her students tremendously. Her passion for teaching has definitely been proven to me during these unprecedented times. Michelangelo is extremely lucky to have such an amazing jewel.”

Quoting late American educator and philosopher Sidney Hook, Principal Marisa Mineiro stated: “Everyone who remembers his own education remembers teachers, not methods and techniques. The teacher is the heart of the educational system.”

Born in Montreal,  Douglas is  the son of the late culinary guru  Norene Gilletz,. She was a well- known cookbook author, food consultant and former owner of a cooking school in Montreal who passed away very recently. From an early age, cooking and working with food has always been his passion. As a one year old, there is a photo of him sitting in a high chair with a rubber spatula in his hand with cake batter. It was a match made in heaven.

Growing up in the West island, Norene  had a cooking school in the basement of their house. Most nights were filled with people who wanted to improve their cooking skills and enjoy the great foods that were created. “I often came downstairs and sat in a corner of the room watching my mother give her classes,” said Douglas. “The  demand for classes exceeded the capacity of our house and so my mother opened up a kitchen shop in the West Island. At the end of my day in high school, I would go to my mother’s shop and help her set up the room for her cooking class and then do my homework quickly so I could watch her teach her classes.”

Douglas  started working in the food industry in 1986 by testing recipes for his mother’s cookbooks. Given his  love for cooking and background in the food industry he enrolled at Pius in 1999, where he studied professional cooking and then went on to study contemporary cuisine. This was a six month course which enabled him to learn local and market cuisine. “It was a great addition to my already large knowledge base,” he said. “I was now ready to tackle the real world with my newly found skills that prepared me for the industry.”

After obtaining his diploma in Professional Cooking, Douglas ventured off to work in the restaurant and hotel industry for a few years.  Working in restaurants allowed him the opportunity to show off his cooking skills  and to lead other cooks in the kitchen. In 2003, his former teacher and now retired pedagogical consultant at Pius reached out with an offer for a part-time teacher’s position. He met with Daniella Borzacchini and Harriet Cohen of AEVS to finalize his dream job as a culinary instructor. “This was going to be a great adventure in the pursuit of my childhood dream to be in the food industry,” he said. “In 2010, I was finally given my full time contract and I have never looked back. I thrive for the look of achievement on my students faces when they accomplish something that they thought they were never able to do.”

Douglas also had a passion for photography and completed an AEC (Attestation D’études Collégiales) at Dawson College. In fact he has now developed his skills as a food photographer for his late mother’s articles in Jewish Action Magazine and for some of her cookbooks. As  well  he is  presently completing his  Bachelor’s Degree in vocational teaching at Sherbrooke University in Longueuil. “When I cook it is like I am a painter and cooking is my canvas,” he says.

Principal Alice Sideropoulos called Douglas a hardworking and dedicated instructor. “We are always so proud to see our own graduates come back and be part of our staff,” she said. “Douglas is a true leader and well-deserving of this honour.”